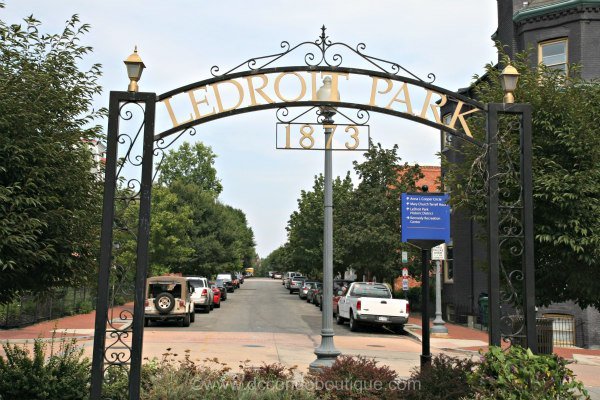 LeDroit Park is a neighborhood in the Northwest Quadrant of Washington, DC located directly Southeast of Howard University.  The neighborhood was developed in the 1870s as one of the Districts first "suburbs" and its initial single-family homes were designed by architect James McGill.  The neighborhood was positioned as a romantic enclave and to attract new home buyers, the developers planted significant displays of flora and fauna.

As the LeDroit Park neighborhood grew in the 1880s and 1890s, brick and framed row houses were also constructed in the neighborhood. While initially a segregated white-only community, by World War One LeDroit Park was home to many of the Districts influential African Americans.  In 1974, LeDroit Park was recognized as a historic district and awarded a place on the National Register of Historic Places.

As developers take aim at improving more and more DC communities, it should come as no surprise that the metro area is quickly becoming one of the most gentrified in the nation. In fact, according ... Read more about 20001 Top Gentrifying Zip Code

Founded 150 years ago, Howard University has been part of the DC area for generations. As it continues its legacy as one of the nation’s top historically black colleges, the ... Read more about Neighborhood Around Howard University Changing

DC leads the country for local community gardens, according to a new report issued by The Trust for Public Land.  With the most community gardens per capita, DC has many plots of land often divided ... Read more about DC Tops For Community Gardens

In a city short of vacant land, the adaptive re-use of obsolete buildings has become the norm for developers.  One of the best transformations in recent years is the Parker Flats at Gage School ... Read more about Parker Flats: Loft Condos in a DC Schoolhouse