A far cry from its beginnings, the Fort Lincoln neighborhood of today offers affordable greenery for buyers searching for a new place to call home in the DC area. The former military site may date back hundreds of years, but Fort Lincoln is now a thriving neighborhood of homes and retail space.

It’s something that’s been generations in the making. Former President Lyndon B Johnson once looked at Fort Lincoln as a place to show off his Great Society programs.  Plans for the “new town in town” included a mix of residences, retailers and recreational space. In the late 1960s, the planned community of Fort Lincoln welcomed in a large senior population, which is still boast today.  Read more about Fort Lincoln real estate.

Fort Lincoln is located in Northeast DC and is bounded by Maryland to the east, New York Avenue to the south, South Dakota Avenue to the west and Bladensburg Road to the north.  Adjacent neighborhoods include Gateway, Woodridge, Colmar Manor, Kenilworth and Eastland Gardens.

People can find older homes or even new townhomes in the neighborhood, but often at more budget-friendly price points than other parts of the DC area. Even at a more affordable price, buyers don’t have to give up the convenience of living in the city.

Those interested in moving to one of Fort Lincoln’s subsidized buildings and condos often end up on long waiting lists. Since then, however, the neighborhood has also welcomed in a more diverse mix of residents.

New development still continues in the neighborhood, as well, with a new rec center and a new early childhood development center. The neighborhood also boasts the enjoyment of Fort Lincoln Park, which is a good place to go for a picnic, hang out on the playground or simply enjoy the surrounding green space. The US National Arboretum is also nearby.

Recent development has likely helped spur some of the neighborhood’s appeal. Home to DC’s only Costco store, other major retailers have also moved into the area in recent years. The commercial district, however, isn’t the neighborhood’s only draw. It’s also relatively more affordable to live in Fort Lincoln. 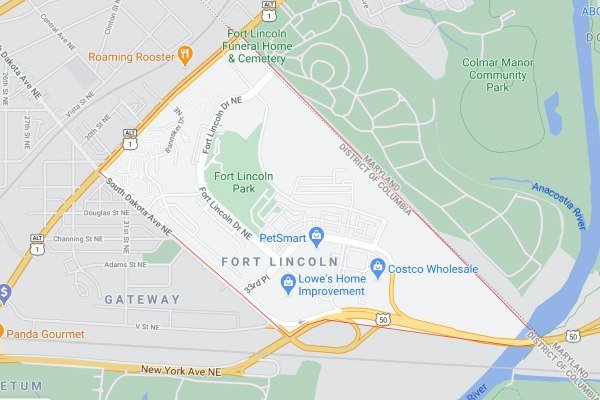