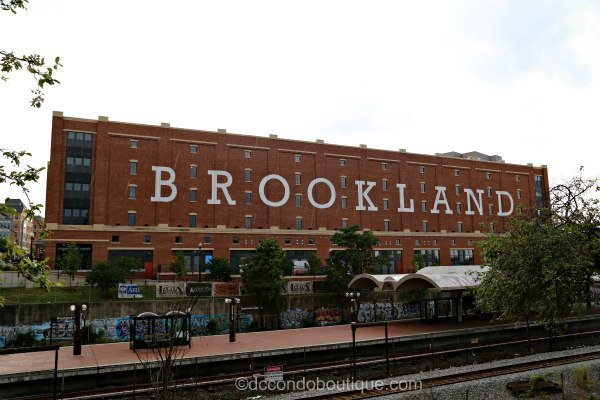 Brookland is a neighborhood located in the Northeast quadrant of Washington, DC that is mostly residential but home to a small, but thriving business corridor.  Brookland draws its name from the Brooks Estate, a 19th-century farm that was developed into housing tracts to form the Brookland neighborhood.  The Brooks Mansion, once home to Colonial Jehiel Brooks and Ann Margaret Queen still stands and is home to DCTV, the District's public access channel.  Following the Civil War with the development of Catholic University and the expansion of Washington's streetcars, Brookland was developed.  Many of the homes constructed during this era in Brookland were Queen Anne and Craftsman style homes. Read more about Brookland real estate.

Brookland Homes And Condos For Sale

$995,000
Neighborhood: Brookland
2628 4th St NE
Washington, DC 20002
3
Beds
1F11/2
Baths
2,380
Sq.Ft.
1926
Year Built
519
Days on Site
DCDC2012756
MLS
An excellent opportunity to shower this property with your TLC and be rewarded with excellent equity enhancement and enduring comfort in a sought after neighborhood. Oodles of potential and...
Realty Advantage

$849,000
Neighborhood: Brookland
919 Evarts St NE
Washington, DC 20018
5
Beds
1
Baths
1,376
Sq.Ft.
1900
Year Built
29
Days on Site
DCDC2074092
MLS
Excellent opportunity for renovation in this row home located in the Brookland neighborhood. This is an end unit with a little under 1900 SQ Ft available. An investors dream! This home is situated in...
Keller Williams Realty

Catholic University has served as a magnet to draw many other Catholic institutions to this section of Northeast DC.  By 1940, over 60 Catholic organizations and institutions called this area home and led to the area being named "Little Rome."  Today Brookland is a stable and integrated community with 12th Street anchoring the neighborhood's business corridor.  Several restaurants including Col. Brooks Tavern, San Antonio Grill and the Brookland Cafe are located here as well as retail establishments including Brookland Hardware, Yes! Organic Market and CVS.

The boundaries of Brookland are 9th Street to the west, Rhode Island Avenue to south, South Dakota Avenue to the east.  Michigan Avenue is the boundary to the north between 9th Street and 14th Street.  Brookland has a northern panhandle which extends its boundaries between 14th Street and South Dakota Avenue northward to Taylor Street.  Neighborhoods bordering Brookland include Michigan Park, University Heights, Stronghold, Edgewood, Brentwood, Woodridge and Langdon. Brookland is served by the Brookland-CUA Metro station (Red Line).

To truly understand DC’s Brookland neighborhood, you need to know a bit about its history. Back in the early to mid 1800s, the area was known as Washington County, and was mostly used for ... Read more about The History Behind Brookland

While some DC neighborhoods are certainly better known than others, you’ll find some true hidden gem neighborhoods when you start exploring the area. Some of the most exciting neighborhoods ... Read more about Hidden Gem Neighborhoods in DC