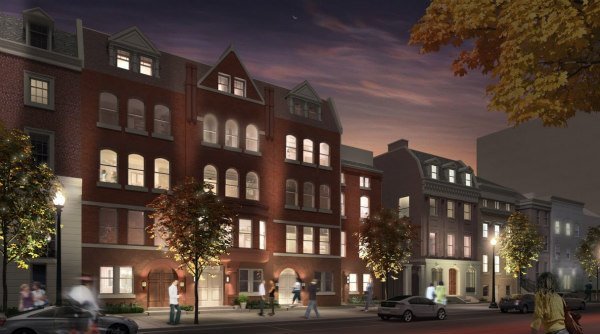 Historic meets modern at 1745N in Dupont Circle. This premier property seems to effortlessly mix elegance and sophistication with many of the things modern buyers are searching for, without giving up on a prime location.

Virtually surrounded by the energy of the city, you’ll find hundreds of boutiques, restaurants, and bars close to 1745N, as well as a setting that’s close to parks and less than two blocks from the Metro for added convenience. The century-old Tabard Inn in Downtown DC sits close to 1745N, plus the area is also home to the famed Iron Gate restaurant, which happens to be the longest running restaurant in Washington.

As well, the property also sits close to more than a dozen embassies and the World Bank. History isn’t lost on 1745N either, as the reimagined property was formed, in part, from six historic rowhouses.

The developer used the existing rowhouses you’ll see at the site, supplementing them with a new six-story structure. The 1745N property now encompasses both the Historic Row and Modern Flats, as the two distinct properties combine to present more than 60 luxury condos for buyers to consider.

The original rowhouses often come with exposed brick, as well as restored wood-burning fireplaces, large windows, and soaring ceilings, some of which top 12 feet. The flats of 1745N, on the other hand, are more contemporary in their design, with open floorplans and more modern architecture.

Some of the units come with private balconies, while all residents have access to the property’s courtyard. The pet-friendly property additionally includes some assigned parking, concierge service, an elevator, and a bike room.

Buyers are treated to such luxuries as oversized windows, Italian cabinetry, and stainless-steel appliances. You will also likely find quartz countertops and wide plank hardwood floors inside the units of 1745N in Dupont Circle.