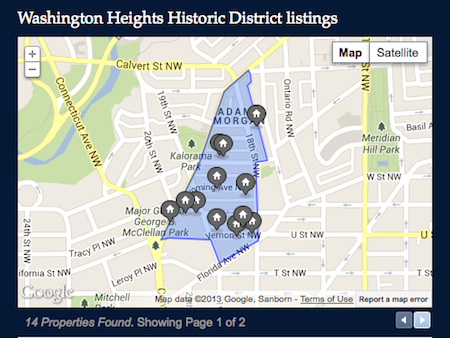 Washington Heights is located in the Northwest section of DC in the center of the Adams Morgan neighborhood.  Dating from 1841, Washington Heights is listed on the National Register of Historic Places since 2006.  Formerly a streetcar suburb along DC’s original city limits on both 18th Street and Columbia Road, Washington Heights has turned into a thriving urban center as both a residential and commercial destination in the city.  The neighborhood reflects a diverse multicultural and multinational mix of people and ethnic restaurants.

The traditional classical architecture of Washington Heights’ historic residential properties is made up of late 19th century row houses that line the streets and early 20th century luxury apartment blocks that face the avenues.  The thriving commercial corridor along 18th Street, NW, features one of the finest and unique collections of architecture in DC.  The individual homes and row houses, which also has several turn-of-the-century condo and co-op developments, together with the small apartment buildings in the residential area of this neighborhood range in style from Queen Anne to Romanesque and Classical Revival.

The Washington Heights neighborhood of Adams Morgan looks like a triangle-shaped section of DC.  Its boundaries are bordered by 18th Street on the east, Florida Avenue on the south, and 19th Street to Columbia Road on the west and north.  Here is a resource to view active Washington Heights real estate listings.