The Wandering Borders of Capitol Hill 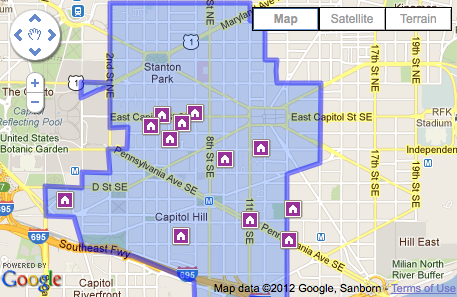 The exact borders of the popular Capitol Hill neighborhood in Washington, D.C., are a hotly debated topic.  The neighborhood shifts according to the varying needs of home sellers and real estate agents. Many unsuspecting home buyers wanting to “live on the Hill” look at properties advertised as such only to find they’re technically in another neighborhood and end up feeling misled.   Long-time residents frequently challenge any reinterpretation that could affect their desirable address and associated property value.

Capitol Hill is one of the oldest residential communities in the District and is also one of the most densely populated with more than 35,000 people in just two square miles.  The name “Capitol Hill” is frequently used to refer to both the historic district as well as the larger neighborhood around it.  Popular areas within Capitol Hill include Eastern Market and Barracks Row.  One of the many bonuses of this prestigious address is the 59 inner-city parks.  Designed by Pierre L’Enfant, the French urban architect and visionary for much of Washington DC’s dramatic layout, these parks offer residents and visitors their own urban oasis and the opportunity to enjoy the outdoors in a serene setting.

According to the Capitol Hill Restoration Society, the current boundaries of Capitol Hill extend across two quadrants – NE and SE, running from the Capitol precinct on the West to F Street, NE on the North with 13th and 14th Streets to the East and the Southeast Freeway to the South.   An “expansion area” South of the Southeast Freeway bounded by 7th, M, 10th, and 11th Streets, SE, is the source of much of the controversy.  In fact, many realtors actively promote “Hill East” and the areas around Stadium/Armory and H Street as being located in Capitol Hill, despite the fact that none fall within the neighborhood’s official boundaries.

Ambitious real estate agents and hopeful new home owners talk up Hill East as a neighborhood that’s close to Capitol Hill’s many amenities but without the higher price tags.  Hill East residents don’t have the option of walking out the door to a variety of restaurants and bistros since the neighborhood is largely residential.  Regardless, many of the area’s long-time residents believe in the neighborhood, viewing their investment in five and ten-year horizons.  Spurring much of this optimism is the fact that the District has targeted a large plot of land immediately adjacent to Hill East for a new development known as the Hill East Waterfront.  Plans originally called for a 50-acre mix of retail, office, and residential buildings up to five million square feet before the recession hit, delaying the project.  Even with the delays, the project should still significantly increase the value of Hill East to the point where it may stand on its own as a beloved and vibrant community.

Other emerging neighborhoods sometimes falsely advertised as “Capitol Hill” include Rosedale, Trinidad and the Benning Road areas.   District planners estimate these areas will also see spillover development as a result of the much discussed streetcar project, legitimately expanding the Capitol Hill boundaries and building these resurgent neighborhood reputations.

If you are interested in living on Capitol Hill, here is a resource to learn more about Capitol Hill real estate options.