The Rhyme and Reason of DC’s Streets 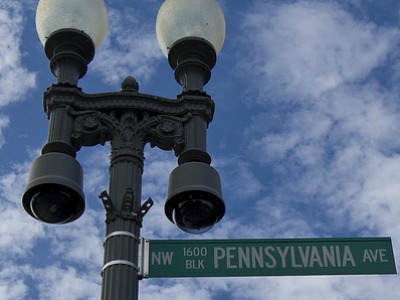 DC is a planned city, and as such, the streets of DC were planned as well.  The city’s naming system with lettered and numbered streets is sometimes confusing for tourists and out-of-towners.  Residents know there is a system composed of a rectilinear grid with a set of transverse diagonal avenues.  Many of the diagonal streets and avenues are named after States with Pennsylvania being the grandest and the home of the White House.   Avenues often intersect in circles or squares and the diagonals create many triangular parks.

DC is divided into four quadrants---Northwest, Northeast, Southwest and Southeast.  The city begins from the U.S. Capitol as its center, and radiates outward forming a diamond shape.  North and South Streets form the north-south axis; East Capitol Street and the National Mall form the east-west axis.  These axes divide into quadrants (i.e., NW, NE, SW, and SE).

Lettered streets increase alphabetically as they go up in distance both north and south of the National Mall and East Capitol Street.  Two avenues, Constitution Avenue and Independence Avenue, line each side of the Mall.  Numbered streets increase in number as they go up in distance both east and west.  Many street names intersect in multiple quadrants.  Each of these intersections is separated by over a mile.  Western, Eastern and Southern avenues form in many places the boundaries of DC.