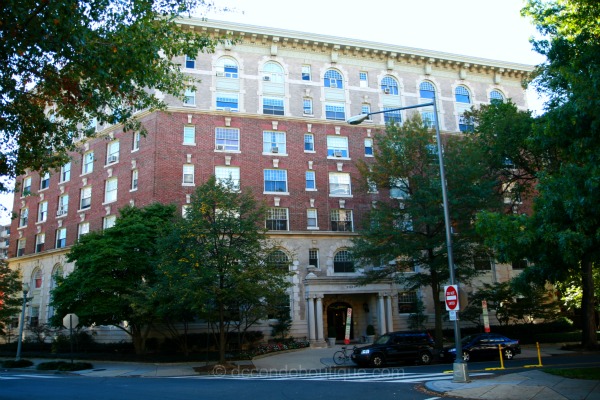 For a century now the Northumberland has offered a sense of enduring luxury in Dupont Circle. First constructed in the early 1900s, the historic apartment building has served as home to countless prominent members of Washington society throughout the years, including judges, members of Congress, government officials and DC’s wealthy elite.

In 1920, the luxury apartment building turned into a co-op, making it one of the city’s oldest, co-op buildings today. Now featured in DC’s “Best Addresses” and on the National Registry of Historic Places, the seven-story building is easily recognized for its elegance and charm.

Many of the building’s original features are still evident today, as the building has retained its high standards for generations. The richly adorned lobby is still complimented by antique furniture, marble and stained-glass windows.

This seven-story building was first constructed to house dozens of apartments, ranging from two- to seven rooms. These days, private homes within the building typically range from efficiencies to three-bedroom designs.

Residents are treated to high ceilings and custom finishes. You will also, however, see some newer and more modern additions to the homes of Northumberland. From refurbished hardwoods to newer appliances and quartz countertops, the Northumberland is just as distinctive in its century-old features as it is in its modern inclusions.

The residences are light filled, thanks to the large windows and the unique design of its architecture. Amenities of the stylish building include a rooftop deck with sweeping views of the surrounding city. The property also offers a 24-hour front desk, a guest suite, extra storage possibilities and an elevator.

The location makes it easy to travel around the rest of the DC area with ease. While the building it close enough to area restaurants, retailers and galleries, it’s also within walking distance of the U Street Metro Station.