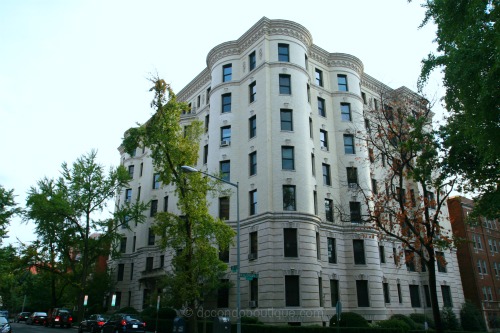 The prestigious Mendota stands tall as one of DC’s first luxury cooperative buildings.  As Washington’s oldest luxury cooperative apartment buildings, the building is regal as you glimpse its untouched elegance and perfectly maintained richness and traditions.  The hillside residential enclave in Kalorama adoringly overlooks most of downtown Washington.  The Mendota is listed on The National Register of Historic Places, and featured in Goode’s “Best Addresses.”  The location is just two blocks from popular Rock Creek Park, where residents can enjoy hiking trails, biking and jogging trails, and horseback riding trails.  Only a few blocks down the hill, residents can find fine dining, shopping, and nightlife in nearby Dupont Circle, Adams Morgan, and Woodley Park.  The nearest Metro stop is Woodley Park Metro Station.

The Mendota is well-located and convenient within easy walking distance to two Metro Stations (the other one is Dupont Circle Metro Station).  It is one block east of Connecticut Avenue on a corner lot at the corner of 20th Street and Kalorama Road.  It is on a gracious tree-lined street between the vibrant neighborhoods of Dupont Circle, Woodley Park, and Adams Morgan.  Built on one of the highest points in Washington, The Mendota offers spectacular one-of-a-kind views of the entire city.  Many apartments have stunning views of The Washington National Cathedral.  The Kalorama neighborhood in northwest DC is largely characterized by architectural styles veering towards late 19th and early 20th-century single-family homes and apartments.  The prevailing architectural styles in Kalorama are Victorian, Mediterranean, Gothic Revival, and Queen Anne.

The coops feature striking architectural details that reveal soaring 10-foot tall ceilings throughout, impeccable original crown molding, majestic oversize windows, hardwood flooring throughout, generous floor plans, detailed Victorian tile fireplaces and mantels, with formal living and dining rooms.  Building amenities include an elegant lobby, a vintage manually-operated elevator, a staffed 24/7 Front desk, a communal courtyard garden, lobby parlor, bicycle storage room, and storage units for residents.  The 7-story coop building featuring 48 residences was built in 1901.  The Mendota is the first apartment building built in Kalorama Triangle.  When it was constructed, The Mendota provided an upscale housing option as an alternative to owning a row house in DC.  The prestigious reputation of The Mendota dates back to 1918 when 48 of its 49 residents were featured in Washington’s social register.