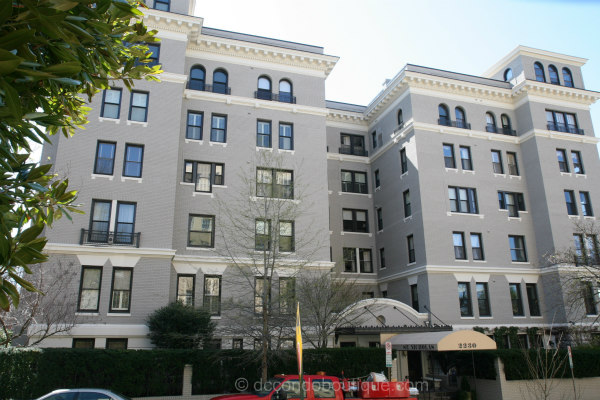 Now more than a century old, St Nicholas epitomizes grandeur of another era. This prestigious, six-story residential building in Kalorama sits in the middle of a neighborhood known for its beautiful historic properties and embassies.

Originally constructed in 1917, the St Nicholas in Kalorama credits its architectural flair to the influences of Georgian Revival and Beaux Arts style points. Even today, residents enjoy large windows and high ceilings with the elegant homes of St Nicholas.

You may also find such touches as granite vanity baths with separate showers and claw-foot tubs. There are only 31 units in the entire property to choose from, and they include either two- or three-bedrooms.

The residences of St Nicholas are usually on the larger side, with typically at least 1,400 square feet of living space, although some units are notably more spacious. The largest residences are two-level penthouse units.

One sits on each wing of the building, and each comes with a private rooftop deck overlooking monument views. In fact, many of the units of St Nicholas include their own private outdoor space.

There is also some garage parking available for residents of the building. Living in the Kalorama neighborhood is part of the property’s appeal, as well.

It’s the kind of neighborhood where you’re likely run into those with high political connections, including perhaps even the Obama family. President Barack Obama and his family moved to Kalorama after serving eight years in the White House.