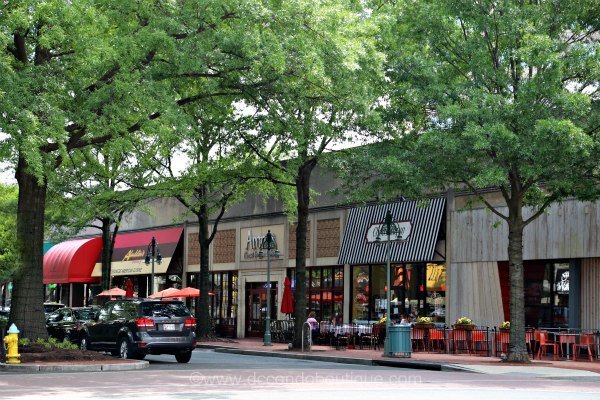 For an urban village lifestyle and the convenience of a popular dog park, it’s time to come explore the many amenities of Shirlington. The village was planned to include restaurants, boutiques, a theater and more, but perhaps one of the biggest draws of all is the Shirlington Dog Park.

Originally established more than three decades ago, the dog park was one of the first in the region to have an off-leash dog exercise area. Pets and their owners have about two-acres to explore, and there’s a separate adjoining area for those with small dogs.

Visitors are welcome at the park daily, and an estimated 200,000 visit the park each year. It holds the honor of being named one of the top dog parks in the country and the region.

In fact, some say it’s the dog park that helps entice people to move to Shirlington. The pet-friendly community was once home to a large strip mall. Its name came about by blending Shirley Highway with Arlington.

These days, Shirlington is also home a to a movie theater, restaurants and a library. The walkable area is additionally close to Barcroft Park, which offers sports fields, volleyball courts, playgrounds and accessible green space for those living in Shirlington and beyond.

The village may not have a Metro stop, but it’s only about 20-minutes by bike to the new Amazon HQ2. Shirlington also has the only indoor bus station in the county.

A lack of a Metro station is likely one of the reasons home prices tend to be a bit lower in Shirlington. You won’t find single-family homes here, but you will find plenty of multi-family residences, including condos and rentals.

The price point is said to be especially appealing to first-time buyers. Another big draw is its urban convenience. The walkable commercial corridor of Shirlington extends to independently-owned stores, restaurants and a Harris Teeter grocery.