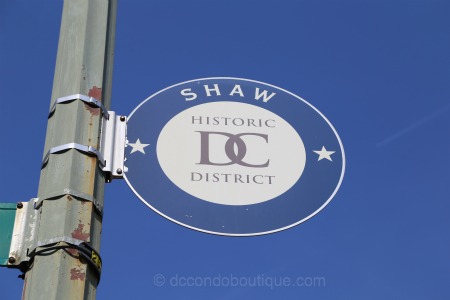 Unlike typical neighborhoods in DC, Shaw was not planned by developers who built identical row houses; instead Shaw was established by individual residents who built their own single homes of frame and brick, which were later filled in with other small rows of homes built by developers.  Development of Shaw began in the 1860s along the 7th and 9th Street, NW, streetcar lines.  Shaw was originally an economically diverse and ethnic neighborhood home to European immigrants and free African Americans and after the Civil War by many southern freed men coming to cities to look for work.  In the mid-20th century, the name Shaw defined the area around Shaw Junior High School.

The Shaw neighborhood is developed along 7th Street up to Florida Avenue and the popular U Street Corridor.  7th Street, NW, the heart of the community, served as Shaw’s business and social center, aided by streetcar lines.  It remains a strong community with residences, churches, and unique commercial architecture.  Because of its unique housing development history and architecture, DC formally recognized Shaw in 1999 as a historic district.  The boundaries are L Street north to Rhode Island Avenue and 11th Street east to 7th Street, NW.  The Shaw district also includes the Blagden Alley/Naylor Court Historic District.  Among the people who called Shaw home were prominent African Americans like Duke Ellington, Carter G. Woodson, and Langston Hughes.

Following the unrest and struggles of Shaw after the 1968 riots, the 1990s brought revitalization and gentrification to the neighborhood and Shaw has become a vibrant and charming community in DC in the past decade.  New businesses have sprung up to cater to neighbors and visitors.  Abandoned homes and buildings have been renovated.  Developers have invested millions of dollars for new construction projects and new amenities that have drawn in new residents and new businesses.  Convenient and plentiful public transportation has made Shaw very accessible.  Two Metro lines—the Green and Yellow lines---run through Shaw, numerous bus lines and several Capitol Bikeshare stations are located in the neighborhood, which has easy access to I-395.