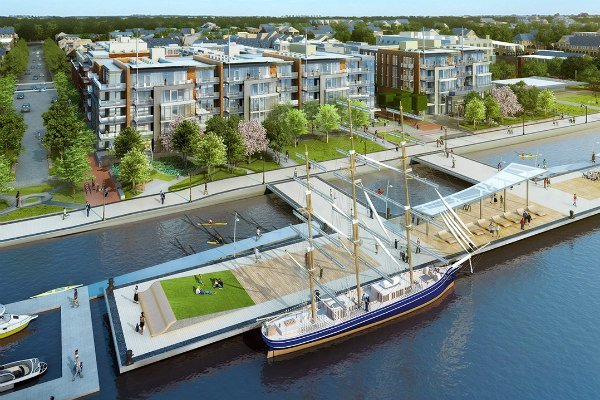 Some brand new townhomes are almost complete at the Old Town waterfront. The first townhome residents of Robinson Landing should move in soon, with more than two-dozen townhomes and eventually another 70 condos slated for the area.

New buyers can expect to find open floor plans with the townhomes, including up to five-bedrooms and desirable rooftop terraces. With some ranging upwards of 3,000 square feet of living space, some of the townhomes also offer Potomac River views and an elevator.

The new townhomes additionally feature European-style cabinetry and quartz countertops in the kitchens, plus tall ceilings and wide-plank hardwood flooring. As well, they also include space for a two-car garage and an optional wet bar on the rooftop terrace.

Three condo buildings are also coming to the site of Robinson Landing, with an expected opening for them sometime in early 2020. Ranging from one- to three-bedrooms, the condos offer between 1,300 to 3,200 square feet of living space, complete with outdoor terraces and sweeping floor-to-ceiling windows. Some of the condos also include a fireplace.

Added amenities of living in Robinson Landing include garage parking, a fitness center and concierge service. As well, there’s also a planned yoga studio, a lounge and a pet-grooming spa planned for the property.

The historic site is getting just as much attention for its features as it is for its location. During construction, crews unearthed suspected Colonial-era artifacts, old mid-18th century ship frames and some building foundations in the area.

The newly constructed buildings hope to showcase some of that history with complimentary designs. The townhomes of Robinson Landing feature brick facades and large windows, in some ways replicating the old warehouse district.