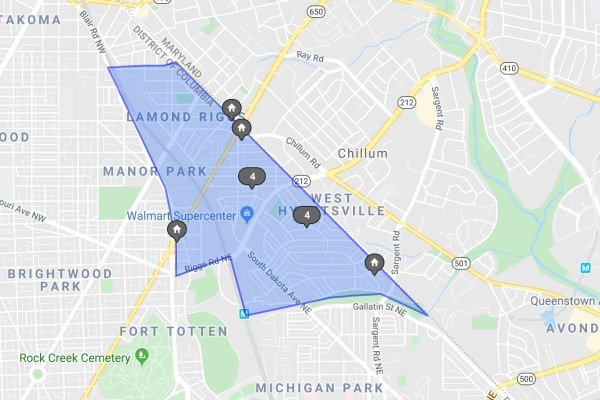 Just a couple of years ago the median sales price in Riggs Park was in the mid $400,000s, with some single-family, detached homes often selling somewhere around the low $500,000s. While it may be unusual to find a move-in ready home in another neighborhood for this price point, Riggs Park often provides an entry point for homebuyers trying to get into the Northeast DC housing market.

Options include a three-bedroom, 2.5-bath restored home dating back to the mid-century. It’s possible to find well-maintained properties with such additions as updated kitchens, restored hardwoods and a location that’s close to desirable shopping and public transportation.

In fact, it’s the convenience to Downtown DC and the affordability that often attracts new residents to Riggs Park. The Red Line passes through Riggs Park. It’s also close to such surrounding neighborhoods as Fort Totten, North Michigan Park and Queens Chapel.

Prospective buyers who at one time were drawn to the affordability of some other nearby neighborhoods are instead heading further north to Riggs Park. Bordered on its northern side by Blair Road Community Garden and on its southern edge by Riggs Road NE, the neighborhood sits generally between Eastern Avenue NE and North Capitol Street NW.

While you won’t find many retailers in the neighborhood, the proximity to nearby dining and shopping in other nearby neighborhoods only adds to the convenience of living in Riggs Park. Families also delight in the neighborhood’s playgrounds and green space, plus the ease of hopping on the Metropolitan Branch Trail for outdoor recreation including biking, walking and jogging.