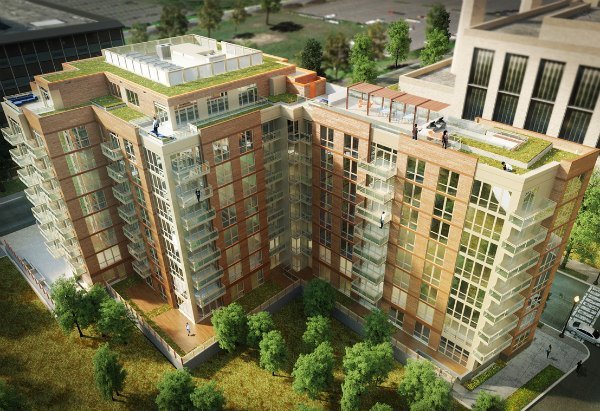 With the option of one- and two-bedroom condos plus penthouse units, Peninsula 88 brings a new option in waterfront living to the DC area.  This eight-story high-rise provides room for more than 100 condominium homes in an ideal setting in Buzzard Point.

Surrounded on three sides by water, Peninsula 88 offers condos ranging from around 700 square feet to some of around 1,400 square feet in size, priced starting in the $500,000s. Designed by Eric Colbert & Associates, the building backs up to Buzzard Point Marina and Buzzard Point Park, just a short walk from major redevelopment in the area.

It joins a range of exciting other projects in Buzzard Point, from the new D.C. United Stadium to additional housing and retail space at the site of the former U.S. Coast Guard headquarters. In addition, the area is slated for more restaurants and expanded trails for outdoor recreation.

When complete, the entire area could yield millions of square feet of mixed-use space, including thousands of new residential units, such as those housed within Peninsula 88. This is sure to only compliment the residential project, as it makes room for another 1,800 square feet of its own ground-level retail space.

In addition, the Peninsula 88 development provides residents with a sensational rooftop terrace overlooking water views of the nearby Potomac and Anacostia Rivers. It’s that natural inspiration that’s expected to flow throughout the development, with a relaxing, spa-like atmosphere.

Residents of Peninsula 88 are also treated to 24-hour concierge service and have the option of convenient parking and extra storage space on each floor of the building. Scheduled for a 2019 delivery, the new waterfront condos go up for pre-sale later this year. Meanwhile, excitement continues to build for other major projects in the area, with the newly constructed stadium expected to open later this summer.

Inquire For Additional Information About Peninsula 88