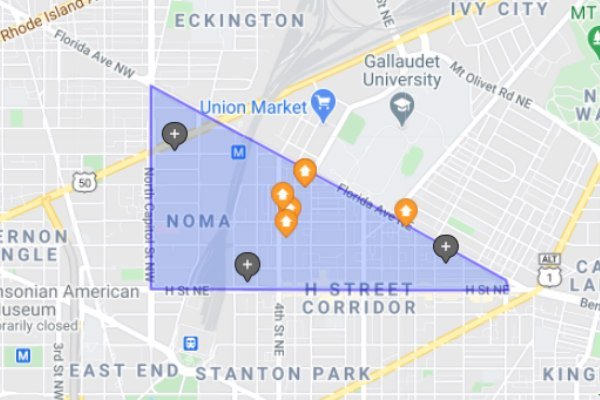 It may not be one of the most recognizable names just yet, but the Near Northeast is definitely a real neighborhood. This recently dubbed DC neighborhood sits in the city’s Northeast Quadrant, bordered by Florida Avenue on its northern side, F Street on its southern side, North Capitol Street to its west and 15th Street to its east.

When referring to the area, the neighborhoods of the Near Northeast and Northeast generally consist of Brookland, H Street, Hill East and NOMA. The Northeast area is also home to Trinity Washington University, Catholic University of America, Gallaudet University and the Mount St Sepulchre Franciscan Monastery.

In addition, this is where you’ll find the National Arboretum, the Atlas Performing Arts Center and the Kenilworth Park & Aquatic Gardens. Most notably of all, the urban neighborhood is home to Union Station, which just so happens to be one of the city’s major public transportation hubs.

That’s a far cry from its humble roots. While the 1800s brought the railroad to the Near Northeast, it wasn’t until the end of the century that the streetcar helped spur commercial and residential development in the area. By the 20th century, the Near Northeast had evolved into a mixed neighborhood.

While it was later devastated by rioting in the late 1960s, H Street development in more recent years has ushered in new nightlife, theaters and performance venues. The Near Northeast has also welcomed in new retailers and sit-down restaurants.

These days, you’ll find a number of places to go and experience in the Near Northeast. Not surprisingly, it’s a favorite destination of young professionals in search of rental properties.

Served by two Red Line stations on its western side, there are also several bus lines for commuters living in the Near Northeast neighborhood to utilize. A new and modern streetcar also runs in the area, and there are now bike lanes and Bikeshare stations found throughout the neighborhood.