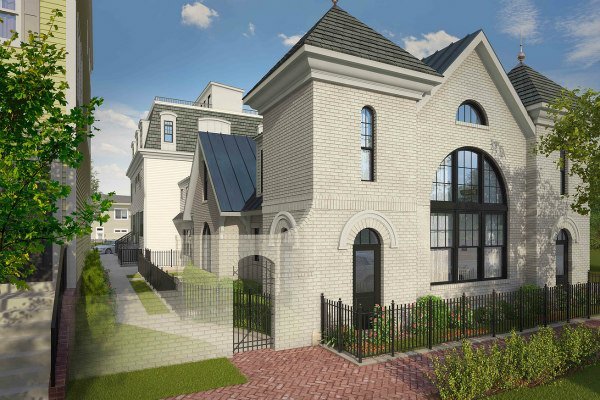 An exciting new low-rise condo development in Northwest Washington is now 50-percent sold out. The two-dozen condos, located at the corner of Morton Street and Sherman Avenue, feature a mix of two- and three-level homes. It’s perhaps the historical aspect of the new condos, though, that is the most impressive to new home buyers.

The site of the Morton Street Mews also includes a 1905 church, preserved for its historical aspect and integrated into the project. It was constructed and designed by one of Washington’s most prominent first African American architects. The only one of William Sidney Pittman’s churches that still stands, the building’s exterior façade has been incorporated into the designs of eight of the development’s 24 units.

Three units were constructed within the church façade to also offer small front gardens, coining the name Morton Street Mews. The five remaining units were designed to blend in with the church. Instead of tearing down the church to make way for new construction, crews set aside bricks and reused them, resulting in a blending of the old and the new. While the exterior of the development is made to compliment the surrounding neighborhood, the interiors are mostly modern, a striking contrast that makes the homes so popular with home buyers.

The condos of Morton Street Mews include two-bedroom units priced starting at $695,000 and three-bedroom units starting at $1,150,000. All of the homes also offer parking. Tall ceilings, wide plank hardwood flooring and contemporary-style kitchens also mark the homes while other notable features include the energy-efficient lighting and appliances, all incorporated into an array of different floor plans.

Just a short stroll from area grocery stores and numerous big box stores, Morton Street Mews is part of a rapidly growing area, now home to several new shops, restaurants, bars and cafes. It is also close to attractions like U Street Music Hall, Lincoln Theatre and not far from public transportation.