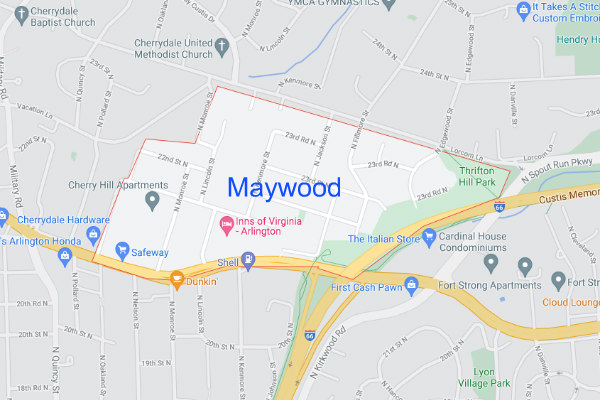 Once known best as a trolley suburb, Arlington’s Maywood District has grown up in recent years. As one of the oldest residential districts in Arlington, you’ll find plenty of historic homes still standing in the area, as well as plenty of charm and a true sense of community.

Neighbors say they’ve seen a lot of change over the past few decades, and much of it has been for the better. Today, you’ll find mature trees with treehouses and wooden swings in many yards.

Most of the homes of Maywood, however, back at least a century or so. Some of them are original catalogue homes.

In the early 2000s, Maywood took a spot on the National Register of Historic Places. This means you won’t find older homes simply torn down and replaced with large modern homes squeezed into small lots in the neighborhood.

Instead, homeowners must abide by certain rules and regulations. These days, you’ll still find homes in Colonial Revival or Queen Anne styles. As well, you’ll find some Craftsman and Tudor Revival-style architecture in the neighborhood.

Some of the oldest homes are cottages, four-squares and gable-front, two-story homes. In the 1910s and 1920s the Craftsman-style bungalow and four-square became more prevalent.

This was followed by some Cape Cods and cottages in the 1930s. Many of the Queen Anne-style homes in Maywood still come with wrap-around porches, diamond-shaped windows, and bay windows.

As for the friendliness of Maywood, neighbors often get together on front porches to socialize, or they gather for monthly wine clubs and book clubs. The neighborhood is home to a small park called Maywood Mini Park with a fenced-in playground and some benches.

Thrifton Hill Park has some nature trails and a picnic table. Today, the closest Metro station is about a mile away, but the Metrobus does run through Maywood.