Live With History At The Car Barn 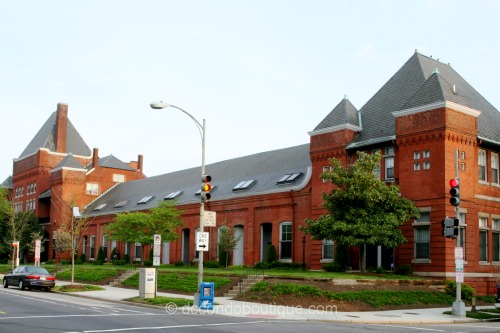 The Car Barn condominiums are in an historic building, formerly known as The East Capitol Street Car Barn, located at 1400 East Capitol Street in the Capitol Hill neighborhood.  The building’s architecture reflects a Romanesque Revival-style designed by prominent DC architect Waddy Wood in 1896.  It was built to store Washington’s streetcars for the Metropolitan Railroad Company.  A private developer more recently purchased the vacant property and developed it into a unique condo building.  The building was added to the National Register of Historic Places in 1974.

The Car Barn was completed in 2005.  It is home to 146 two-level one and two bedroom condo residences in three and four story historic brick buildings on East Capitol side.  The living area is on the first floor, and bedroom(s) are upstairs. A total of 50 units are two bedroom townhomes with 1-1/2 bathrooms.  The quiet building has an ample interior courtyard, and elegant gates around the property.  Amenities include a swimming pool, secured parking for each resident in the garage, attractive landscaping, vaulted ceilings, and outdoor space with a balcony for each condo.  The homes have great views, huge walk-in closets and a generous master bedroom.

The building was a repair shop and administrative offices for the Railroad Company in addition to a streetcar barn.  Its history spans the stages in the rapid transit system, including the electrification of DC streetcars in the form of electrical-powered vehicles, and the end to horse-drawn carriages in the 1890’s; the centralization of streetcar lines into a network in the early 20th century; and the replacement of the streetcar by the bus in the 20th century due to their flexibility.  One streetcar line went down East Capitol Street, turned north at the Capitol and then north again on 9th Street NW.  In 1962, the final streetcar was operated in DC and the East Capitol Street Car Barn was later used to store buses.  The Car Barn was finally taken out of service.  For almost 40 years, the brick building stood empty before being converted into condos.  Today they remain a desired address on Capitol Hill.