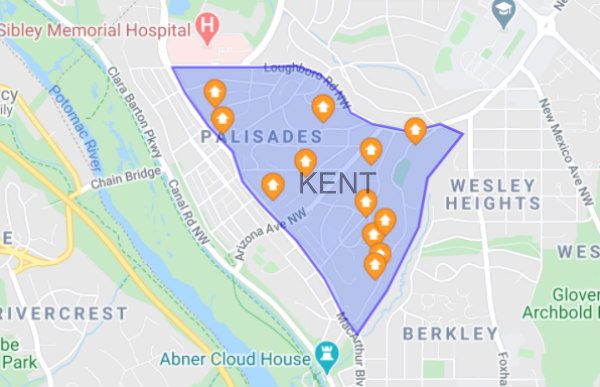 With friendly neighbors and easy downtown access, Kent offers a superb option for those searching for a new place to call home in Northwest Washington. In fact, it’s that combination that seems to attract many new residents to the neighborhood, and leads to many long-time residents, as well.

Mostly built up in the 1930s and 1940s, homes in Kent tend to be a mix of older Colonials, as well as some more contemporary, architecturally-diverse homes, most of which tend to be on the eastern side of the neighborhood. A majority of homes in Kent sit on large lots with a large amount of square footage.

It’s the kind of place where neighbors become friends, and potluck dinners are kind of a big deal. Because Kent sits on the northwestern edge of DC, it’s also the place where urban attractions are just as close to the homes as parks and recreational trails.

Those who like hiking or simply getting out and enjoying nature are sure to find something special in Kent. The upscale neighborhood of Kent is also close to several area sites and attractions, including the popular Capital Crescent Trail for outdoor run and recreation.

Battery Kemble Park is nearby, as is Palisades Spray Park. Homes in this part of DC also sit close enough to dining options, such as the restaurants of MacArthur Boulevard.

Although you won’t find any commercial development in Kent itself, it’s close enough to make it convenient for local residents. Some homeowners say the friendly appeal of the neighborhood is one thing, but the ability to get to work in a short amount of time is a big convenience, as well.