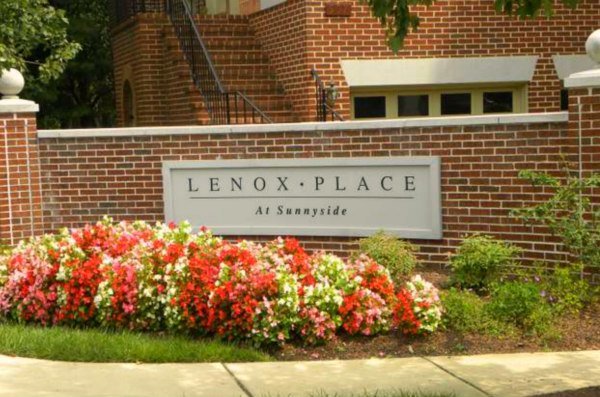 It may be tiny in size, but the small townhouse community of Lenox Place at Sunnyside is packed with history. Home to around 120 townhomes today, the tiny enclave is virtually tucked out of sight from passing motorists and cyclists.

Found on the northern side of Alexandria, the townhomes are part of the historic Sunnyside neighborhood. The area originally belonged to a wealthy African American landowner named Charles Watson.

The Watson family soon subdivided the land and called it Sunnyside. To this day, some neighborhood streets are still named after Watson family members, including Charles Avenue and Elbert Avenue.

There’s even a plaque dedicated to the Watson family in the center of Sunnyside. While the street names remain, the original subdivision has changed over the years. The Lenox Place at Sunnyside townhomes were constructed primarily between the late 1980s and early 2000s

With private garages and green space, many of the multi-level townhomes in Lenox Place feature two stories of windows. This feature allows for an excess of natural light to flow throughout the homes.

Another major bonus for potential buyers in the community is the uniqueness of the homes. Each townhome in Lenox Place is just a little bit different, with layouts that are designed to appeal to a range of buyers.

While the floor plans are certainly desirable, so is the location. The townhomes of Lenox Place sit close to several options in shopping, dining and entertainment in Alexandria.

Lenox Place is also within walking distance of Potomac Yard and a future Metro station. Just a few miles away is Crystal City, and the site of Amazon’s new HQ2.

It’s also convenient enough to Old Dominion Trail, the Four Mile Run bike trail and Elbert Triangle Park for the enjoyment of green space and outdoor recreation in the area.