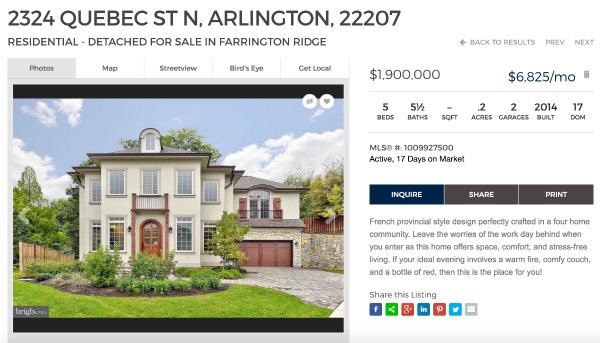 There’s a new option for prospective homebuyers in Arlington, and this one has a big name attached to its sale. Former Washington Wizards player Marcin Gortat just put his DC-area home on the market, with an asking price of $1.9 million.

The news shouldn’t come as much of a surprise, as Gortat now plays for the LA Clippers. For prospective buyers, though, the home is a real prize, and having the NBA pro’s name attached to the sale is just part of the attraction.

Gortat originally purchased the home for just under $1.6 million in 2014. At the time, some reported the new construction home had hit a new record for its price per square foot in the area. While that record’s since been broken again by a different property, the appeal of Gortat’s former home is still evident.

In addition, it’s said the home also features a wet bar on the lower level, a steam shower and radiant flooring in the master bath. It also features plenty of space, even for a nearly seven-foot tall basketball player. High ceilings exist all across the home, with particularly high, 10-foot ceilings on the ground level.

Located in Arlington’s Cherrydale neighborhood, the area is mostly known for some of its older, yet newly renovated homes and its quiet streets. It also, however, contains newer homes such as this one, built-up on lots where older homes were recently torn down.

Within a short walk of area sites and attractions such as parks, restaurants and the Metro, the neighborhood certainly proves an attractive option for future buyers. In fact, the community of Cherrydale is currently said to be one of Arlington’s most in-demand neighborhoods.