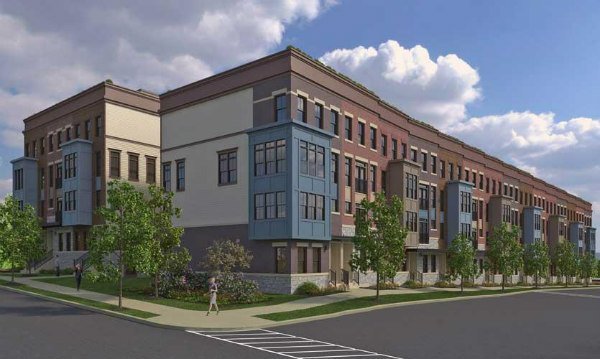 The much-anticipated new Georgia Row development is nearing completion, with the first three phases soon to open to new residents. Already, sales are well underway within the complex, eventually to include a total of four phases of development.

Officially named Georgia Row at Walter Reed, the development offers your choice of multi-level residences, marketed as townhome-style condos. With the option of a smaller unit of around 700 square feet to homes in excess of 1,800 square feet of living space, the condos offer plenty of choices for new buyers.

Coming in one-, two- and even three-bedroom floor plans, the multi-level condos include the main living space on the ground level, with bedrooms on the top level. In addition, some plans additionally call for bedrooms on a lower level of the home, as well, allowing for plenty of privacy within the condos.

Buyers may also choose from a number of different finishes, including the cabinetry and counter-tops, while standard finishes include the wide-plank engineered hardwoods and high ceilings. With dozens of different homes, some also include the option of a large rooftop terrace.

Additionally, new residents have the option of purchasing nearby, on-site parking for an additional fee. As well, the convenience of the location makes it easy to catch public transportation, sitting only about a half-mile away from the nearest Metro station.

The location also makes it easy to directly access nearby shops, dining and entertainment options, right on the site of the former Water Reed Army Medical Center. The massive redevelopment project calls for new housing and retail space in the area, along with the eventual inclusion of hotel space, cultural space and a number of acres of open green space.

The entire development will take several years to complete. As for Georgia Row at Walter Reed, phase four is expected to come sometime later this summer.