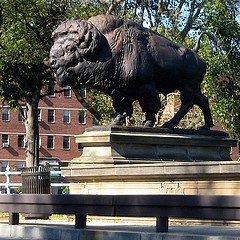 In the upper-crust Georgetown social circles, a friendly rivalry exists between residents of the East Village and West  Village enclaves.  Although not fortified like the Maginot Line during World War II, Wisconsin Avenue serves as the dividing line between these two urban villages.  East Village is home to the rich and famous including Ben Bradlee, Sally Quinn and Bob Woodward and has also been featured in several movies over the years.

The housing stock in East Village includes a selection of traditional Georgetown row houses that line the streets of the village.  Some of my favorite East Village homes are located on Q Street.  Rounding out the neighborhood housing inventory are several condo developments including Georgetown Gateway and Dumbarton Court.  Here is resource to view Georgetown East Village real estate.

Could I get a list of rentals in the East Village versus sales.