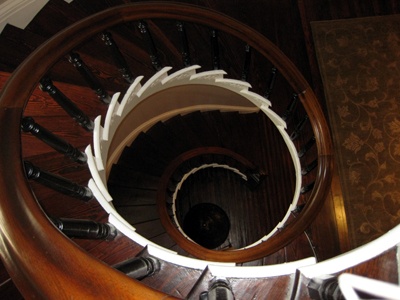 One of the finest homes in Georgetown's East Village at 3007 Q Street is currently on the market.  This Italianate and Second Empire style home is located along historic Cooke's Row, which consists of four grand double houses.  The home was designed by Thomas Plowman and built in 1868 by Norris Starkweather for Washington's first territorial governor, Henry D. Cooke.

This three-story home has been meticulously renovated and features six bedrooms, five full baths and one half bath.  The make-over includes restoring many of the original period features along with modern electrical, plumbing, HVAC and insulation.  Other features of the home include an au pair suite, private outdoor terrace, 3-car parking and substantial storage space.

The defining and awe-inspiring feature of this home is the three-story circular stairway which has been restored to its original 19th century grandeur.  This East Village home at 3007 Q Street is listed for $6.5 $5.5 million.