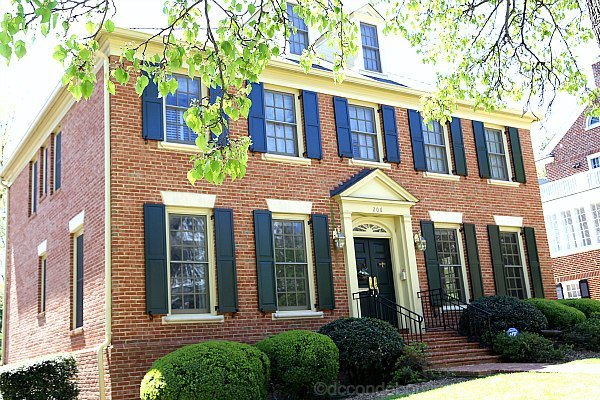 Found just to the west of Old Town Alexandria, the former streetcar suburb of Rosemont is a cozy place to call home. First developed in the early 20th century, Rosemont was originally built as a streetcar suburb, with plans to connect it with DC and Mt Vernon via electric rail service.

By the early 1930s, the streetcar stopped running, but the neighborhood lived on. These days, the Rosemont Historic District is part of the National Register of Historic Places.

Filled with your choice of townhomes, bungalows and Colonials, the tree-lined streets of Rosemont help create a friendly and welcoming vibe. The single-family homes of Rosemont were mostly built up between the early 1900s to 1930, ranging from Craftsman-style bungalows to much larger Colonial Revivals and Arts and Crafts architecture.

Later in the neighborhood’s growth came rowhouses and garden apartment buildings. Even without the old streetcar in operation, this long-standing neighborhood still retains much of its original appeal.

Many homeowners in the neighborhood choose to stay in Rosemont, building additions to their homes instead of opting to move in search of larger floorplans. This is also the kind of place where you’ll find porch swings and sidewalks, with the appeal of a small town, yet the convenience of living close to a much larger city.

Rosemont offers a neighborhood school too, which helps attract families with young children. As appealing as Rosemont is for homeowners, it’s also convenient.

While the neighborhood itself is almost entirely residential, it’s also not too far from upper King Street. For this reason, living in Rosemont makes it easy to enjoy the many boutique stores, restaurants and bistros in the surrounding area.

The homes of Rosemont also sit within walking distance of two Metro stations. As well, the location is a within easy distance of major roadways in the area.