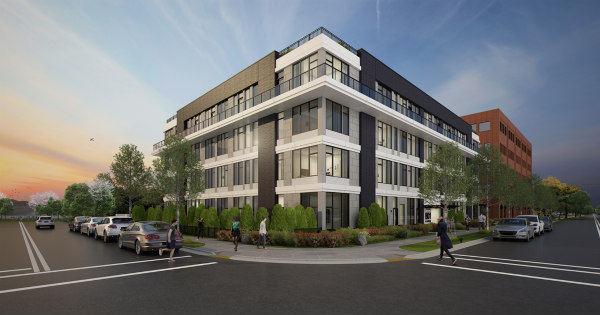 A former office building in Old Town Alexandria is about to be reborn with a new life as a luxury condo building. The older building at 801 North Fairfax Street is in the midst of being transformed into a new boutique condo property.

When finished, 801 North will deliver more than 50 new luxury condos to the neighborhood in one- and two-bedroom layouts. There will also be some penthouse residences for buyers to choose from at 801 North.

Each home at 801 North features an open floor plan with high ceilings and walls of windows allowing for plenty of natural light to flow throughout the homes. In addition, you’ll find things like gourmet kitchens and plenty of other modern features and finishes.

The property additionally features such shared community amenities as a rooftop deck overlooking the Potomac River. Of course, the location is a big part of the property’s appeal.

The new 801 North condos sit conveniently close to several restaurants, shops and parks in Old Town. It’s also easy to reach the rest of the District from the location.

Formerly the site of a four-story office building dating back to the early 1970s, the original building was called Waterfront I. It was one of two office buildings overlooking the river.

801 North is not the only recent development project in the area. A new mixed-use project on Montgomery Street has recently brought in new retailers, while another development plans to bring new luxury condos to North Royal Street. Sales at 801 North are slated to begin this summer.