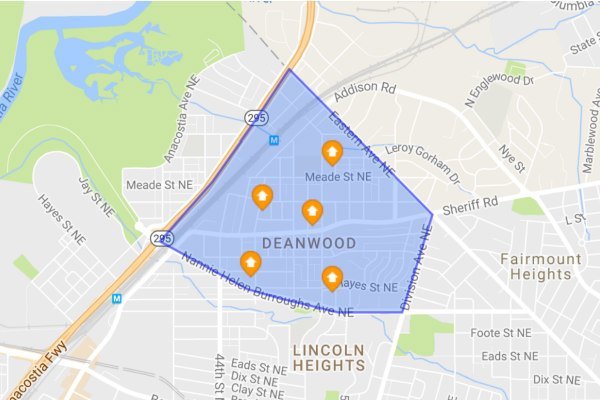 An up-and-coming DC neighborhood, prospective buyers can currently find real value in Deanwood, an area some deem one of the hottest neighborhoods in the nation. This predominately African American neighborhood enjoys a mix of available home styles, from colonials and craftsman-style homes to Victorian and prairie designs. While many properties contain yard space they are also often close to gardens and parks, plus outdoor events.

In fact, Redfin, a real estate brokerage, considers Deanwood to be one of the nation’s most desirable. Coming in at number seven on the list of ‘Hottest Neighborhoods’, agents credit the neighborhood’s easy access to two Metro stations, making it simple to reach downtown or Capitol Hill.

As well, the report also makes mention of the neighborhood’s affordability when compared to similar homes in other DC neighborhoods. The consensus is that Deanwood offers larger homes for your money, though that may not last for long.

Some of that reasoning can likely be credited to a series of recent additions. The local high school has been renovated and it’s not the only site. Vacant for a half-century, the old Strand Theatre is in the midst of a $1 million project that aims to restore the property and prime it and the surrounding area for future development. Previously released plans called for the addition of plentiful new retail space and community space, all topped off by affordable housing.

This comes just a few years after the city opened up a more modern rec center and library. That $33 million project included a gym, pool, meeting rooms and more. As the neighborhood heats up though, likely so do prices.

The median sale price right now for Deanwood sits in the low $300,000s, with about one-third of homes selling for more than the original listing price. While that’s still good news for buyers, long time residents say there are plenty of signs that real estate prices are headed up.