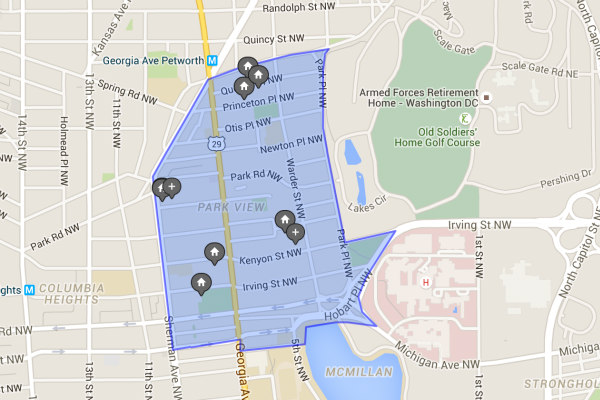 Park View is a small, quiet neighborhood in northwest DC with a strong sense of community among its residents.  Just north of Howard University, two Metro Stations serve the area both on the Yellow and Green Lines: Georgia Avenue-Petworth and Columbia Heights Station.  There are also several Metro bus lines.  Surrounded by Columbia Heights, Petworth and Howard University, the neighborhood around it has been developing with new restaurants and bars.  The nearby commercial corridor along Georgia Avenue, especially the blocks closest to the Petworth Metro, have attracted services to the area, including a CVS, restaurants, and eateries with adjoining patios.  The commercial artery of Georgia Avenue is one of DC’s oldest thoroughfares.

Park View gets its name from its views east over the grounds of Old Soldiers’ Home.  When Park View was developed, the Old Soldiers’ Home campus was open to the public as a park in the 1880s---one that was compared to New York’s Central Park.  The grounds were beautifully designed with ponds and pedestrian paths.  Today, Park View is a quiet residential community that is undergoing gentrification, a once historically predominant black neighborhood.  The boundaries of Park View are Gresham Street on the south, Rock Creek Church Road to the north, New Hampshire Avenue and Georgia Avenue to the Old Soldiers’ Home grounds to the west, Park Road to the east, and Columbia Road to the south.

Most homes in the Park View community are row houses in the Wardman-style, a popular architectural style seen throughout areas of DC.  Those homes on the market sell quickly, given a limited housing stock and low inventory.  Many first-time homebuyers and young couples are therefore prompting bidding wars.  Park View is still a relatively affordable neighborhood in the city to buy a home.  Many new homebuyers in Park View have been renting in DC, and are ready to transition to buying a home.  Park View has a few community gardens, ample greenery allowing neighbors to collaborate and grow fresh produce in these community gardens.