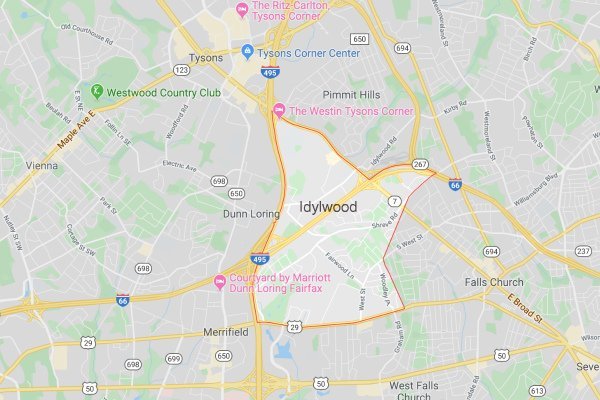 From its diverse housing opportunities to plentiful outdoor recreation and an easy commute, there’s plenty to enjoy about living in the Idylwood neighborhood. Part of Fairfax County, Idylwood originally grew up along the old W&OD Railroad route.

New transportation routes helped spur even more development over the years and decades, adding in easy access to several major roadways, as well as providing easy Metro access for commuting around the rest of the DC area. For residents, though, they often don’t have to venture far to enjoy options ranging from shopping and recreation to entertainment venues.

The suburban area is actually bordered by the City of Falls Church to the east, Dunn Loring to the west, and Tysons and Pimmit Hills to the north. This puts the homes of Idylwood just minutes away from the sports fields, tennis courts and playground of Idylwood Park, or shopping in nearby Tysons.

You’ll also find a number of unique restaurants to choose from, plus a Whole Foods Market. As for housing, options in Idylwood range from condos and townhomes to detached homes.

The up and coming Founders Row is slated to bring in hundreds of new apartments and hotel rooms to the neighborhood, with a mixed-use setting that will also provide thousands of additional square feet of retail space. As well, the future development also promises a movie theater, office and restaurant space.

The new development joins a community that’s already known for its diversity, schools and family-friendliness. In fact, Niche.com considers Idylwood one of Virginia’s best suburbs to live. The website recently gave the neighborhood an overall “A+” grade.

Idylwood scored extremely high for diversity, health and fitness, and as a good place for families. It also high for its public schools, outdoor activities and nightlife.

Niche describes Idylwood as a neighborhood with more of an urban feel where most people own their own homes. It also points out an abundance of parks, coffee shops and restaurants in the neighborhood.