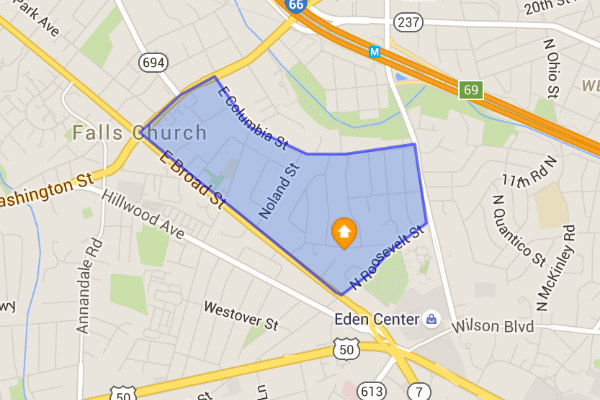 The Broadmont neighborhood in the city of Falls Church, a northern Virginia community, is a lovely area with mature trees, landscaped lots, pretty spring flowers, and classic 1930s-1950s single-family homes.  This is the kind of friendly neighborhood where neighbors know each other and look after one another’s homes when they go on vacations.  Broadmont is close to downtown DC.  The East Falls Church Metro Station on the Orange and Silver Lines is within walking distance from Broadmont, and several Metro bus routes run through the neighborhood.

The mix of architecture, including Cape Cod-style and split-levels, large wooded lots and close accessibility to major roads and shopping makes Broadmont a sought-after neighborhood.  Broadmont offers residents’ easy access to work and cultural attractions in DC by Metro, bus, car, or biking.  Broadmont distinguishes itself from other suburbs by its small-town feel, and unique homes that aren’t exactly like one another.  The education website Niche.com places Falls Church City Public Schools in the top 100 Public School districts in the United States.  Broadmont remains a quiet environment away from traffic noise, although it’s only five minutes away from Lee Highway, Route 7, and Route 66.

The Broadmont neighborhood is bordered by Van Buren Street on the east, Washington Street on the west, Columbia Street on the north, and Broad Street to the south.  Cited as one of the “10 Great Neighborhoods” in Arlington Magazine, Broadmont is nestled along Route 7 north of Seven Corners.  Would-be homebuyers are gravitating toward Northern Virginia, which is seen as a hot demand market.  The population in Arlington County has grown by 12% in the last 10 years.  Broadmont is a must-see for homebuyers next to adjacent Arlington.  With its mix of postwar Cape Cods, ramblers that have been renovated, some contemporary homes, historic Victorians and brand new construction, the established homes in this neighborhood sit under large canopies of trees.  Residents are just minutes from Seven Corners Shopping Center and Eden Center, a popular Asian hub for restaurants and shops.  Residents are close to shops, nightlife, and cultural venues in Falls Church, including ArtSpace Falls Church and the State Theatre.  Broadmont residents communicate with one another via a neighborhood online chat site for trading recommendations for plumbers and dog walkers, or searching for a travel agent.