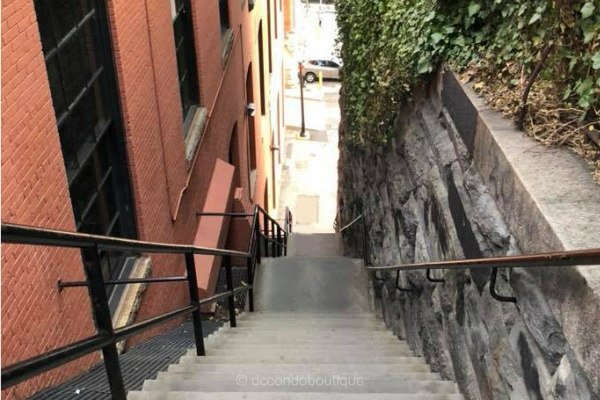 Just in time for Halloween, one of the scariest movies in history could soon receive a true mark in history for generations to come. A set of stairs in Georgetown best known to locals and some visitors as “The Exorcist” steps is in line for a possible historic landmark designation.

A group recently filed an application with the Historic Preservation Review Board. They want the 97 steps leading from M Street to Prospect Street, along with a nearby retaining wall, considered for historic status.

There’s already a plaque in the area noting the significance of The Exorcist Steps and the part they played in the movie. Old movie buffs likely remember the scene that played out in the early 1970s when one of the characters in The Exorcist film, a priest, tumbled down the steps to his death while trying to fend off evil spirits.

While the steep, narrow stairs may not have appeared in a happy Hollywood scene, they certainly played a big part in a memorable one. It turns out there’s more to these steps, though, then just pure movie magic.

They were actually constructed in the late 1800s as part of a streetcar barn and station. While many people visit the site today just to mark the big screen setting, they also come just to get in a good workout, running up and down the steps for exercise.

Now with new development and construction occurring all around the steps in Georgetown, however, preservationists want to make sure the steps remain intact for years to come. That’s where the preservation review board comes in.

Their approval could give more leverage to keeping the steps because any future plans that might emerge to alter or demolish the steps would need approval from the mayor. The review board takes up the issue in mid November.