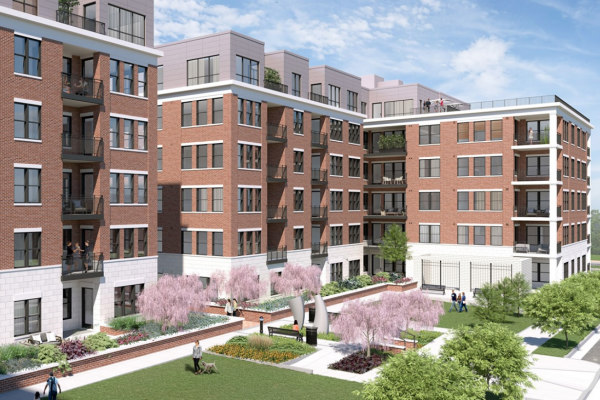 Amazon’s new headquarters and a new Virginia Tech Innovation Campus may be planned for National Landing in the near future, but already a new luxury condo development is embracing the future with high tech features of its own. Dylan is scheduled for delivery sometime this year, and already a large number of condos in the new development are sold out.

The complex consists of two six-story towers within walking distance of Old Town North, Del Ray, Dangerfield Island and Mount Jefferson Park. The new condos are also going up conveniently close to a new Metro station, which sits just a few blocks away from the property, making Downtown DC just minutes away from the new condos of Dylan.

While the location is certainly desirable to residents, the stylish new development also has some high-tech features that are sure to appeal to buyers searching for a new place to call home in this high-tech area. Planned features include a smartphone enabled lock entry system, a smart intercom with video calling, and virtual visitor keys.

As well, the condos with each come with a smart thermostat for energy efficiency, plus there will be some Siri and Alexa voice controls. Other planned opportunities in the new complex include Amazon Hub lockers, electric vehicle charging stations, and high-speed Wi-Fi.

This non-smoking development is pet-friendly, as it includes some pet washing stations, plus the parking garage includes a maker’s space, designated parking spaces for residents and some bicycle storage. Other options include a rooftop club room, a gym, and a courtyard for admiring sunset views.

Buyers at Dylan have more than 130 condos to choose from. New residents of Dylan could move in as early as this coming September. The contemporary-style condos range from one- to three-bedroom layouts with large dens and some private balconies.