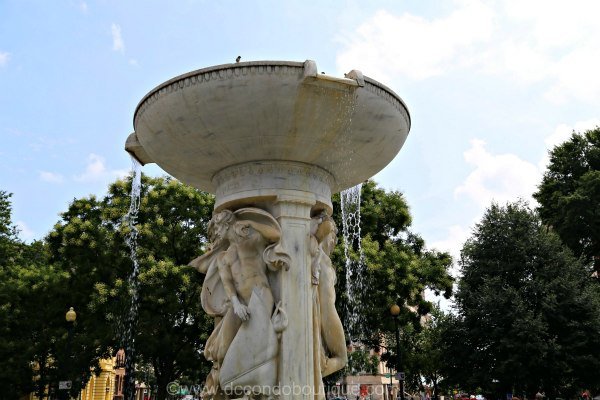 Many people recognize they’re in Dupont Circle when they see the traffic circle and the infamous two-tiered fountain in honor of a Civil War Admiral. The marble fountain went up in the early 1920s to replace a bronze statue. Today, it’s a popular gathering spot and a good place to people watch.

History comes alive in Dupont Circle, with stops at places like the Woodrow Wilson House. The Georgian Revival home was once occupied by President Woodrow Wilson and is said to look much the same today as it did when Wilson lived there in the 1920s.

Another option is Anderson House. Now home to the Society of the Cincinnati, Anderson House hosts book signings, lectures, luncheons, and more. The former home of a diplomat, the home prominently features what’s referred to as the Gilded Age in Washington.

The Mansion on O Street is truly the only museum of its kind. The unique spot has dozens of secret doors, passages, and themed rooms to explore. It’s the place to go to find everything from artwork to a letter once written by John Lennon, Prince’s Purple Rain jacket, and a signed guitar from Bob Dylan.

Several other museums also have a home in Dupont Circle, including The Phillips Collection. Formerly the home of founder Duncan Phillips, the art museum features contemporary artwork and frequent special exhibitions. The National Geographic Museum is located in Dupont Circle, too. Visitors are treated to photography, interactive displays, and live demonstrations.

Heurich House Museum is yet another option. Set inside the former home of a successful brewing company owner, Heurich House is open during select days and times for public and private tours. The old mansion tells the story of DC’s past and that of a German immigrant pursuing the American Dream.