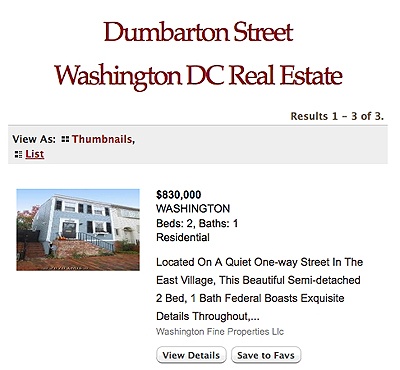 Dumbarton Street in Georgetown's East Village runs a mere 5 blocks from Wisconsin Avenue to Rock Creek Park.  It is a one-way street that has an east-west orientation between N and O Streets. The street is lined with older brick row houses which have been meticulously restored to their 19th century grandeur.  Mature trees and brick sidewalks enhance the beauty of Dumbarton Street.

Dumbarton Street was in the news this week as it is home to troubled IMF head Dominique Straus-Kahn.  Other notable Dumbarton Street  residents have included Henry and Nancy Kissenger, Cyrus Vance, Harold Ickes, Ben Bradlee, Kitty Kelly, and Don Ritter.  Dumbarton Street is also home to the United Methodist Church, the First Baptist Church of Georgetown, the Epiphany Catholic Church and the Rose Park Recreation Center.