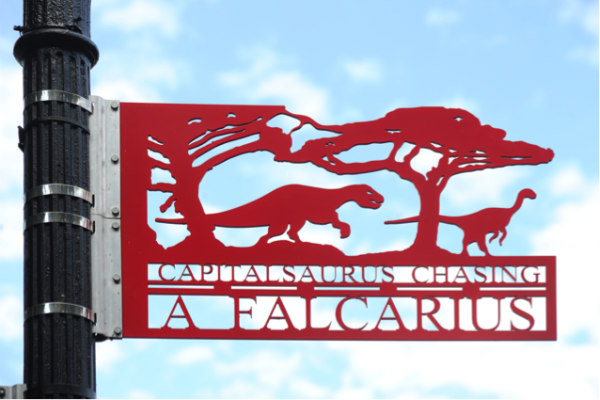 There’s no doubt DC is packed with history, but that history actually dates back millions of years. Obviously, you won’t find dinosaurs in the area anymore, but you will find some dinosaur signs.

Look for one the next time you’re on Capitol Hill along F Street SE. A stretch of the roadway near the corner of First Street is now called Capitalsaurus Court and features a commemorative street sign to mark the spot.

In the late 1800s, crews were working on the street to lay down a sewer pipe, but they ended up making a major find. During excavation work, the crews uncovered a section of dinosaur vertebra and some other bone fragments about 45 feet underground.

It’s likely those dinosaur fossils were at least 100 million years old. For years scientists made guesses on what kind of dinosaur the bones came from.

At some point, the dinosaur was dubbed Creosaurus potens, but over the years scientists finally conceded this particular find could actually be tied to an entirely new species of dinosaur. Scientists suspect the real dinosaur weighed more than 2.5 tons and was about 30-feet long, but it could have even been a 40-foot long carnivore.

Flash forward early 100 years after the bones were uncovered, and a local paleontologist came up with a catchier name. He called it the Capitalsaurus.

Some local fifth grade students and their teachers then petitioned city leaders to make the Capitalsaurus the official dinosaur of DC. A day in late January was then designated as Capitalsaurus Day.

While you can’t see the bone on display, you can see the Capitalsaurus Court sign on a one block stretch of F Street SE where the dinosaur bones were discovered more than a century ago. It’s just one more unique piece of history with ties to the DC region.