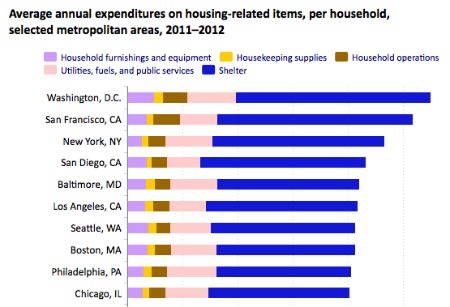 The DC region outstrips New York City and Los Angeles for the highest housing costs in the United States.  DC is #1, according to new U.S. Bureau of Labor Statistics data, when it comes to amount households spend on housing costs per year at $17,603; utilities, operations and furnishings bring the figure even higher. The Bureau of Labor was for 2011-2012 data, so with recent increases in in DC housing costs, we may be even further ahead of the rest of the nation today.

DC also can count itself as America’s priciest housing market, according to a new report by the U.S. Bureau of Labor Statistics.  While the impact of the Great Recession on the housing market generally saw a collapse in real estate prices in much of the country, the DC market has been stunningly resilient.