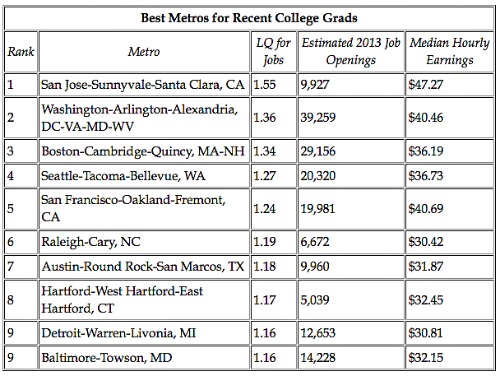 Graphic courtesy of The Atlantic Cities

Young, educated Millenials are not matriculating to grad school at the levels of previous generations, and instead are looking for jobs upon college graduation.  Across the nation, DC ranks as the 2nd best city for jobs and earnings for recent college grads, according to labor market data from EMSI.    DC follows San Jose-Sunnyvale-Santa Clara, CA with a reputation for attracting highly educated singles.  DC has a lot to offer young and educated 20-somethings: a strong job market, high wages, fun walkable neighborhoods and a thriving nightlife in revitalized vibrant downtown areas of the city.

In a separate survey, DC comes out on top as the best city in the U.S. for young adults to live and work.  NerdWallet ranked DC #1 out of more than 100 large metropolitan areas as a result of higher median incomes for young adults ages 20-29, ability to find affordable housing, low unemployment rates and cultural events and activities.  Twenty-something young adults can start professional jobs in DC and live in trendy urban neighborhoods which offer a wide choice of restaurants, coffee shops and nightlife.

The Bureau of Labor Statistics recently highlighted in a report that DC salaries rank third nationally with Washingtonians earning 75% more than the national average.  Well-paid Washingtonians are eagerly taking advantage of low interest rates and buying condos or homes in the DC area.  Using similar data, DC was named 5th Best City in the U.S. for young people by an AOL Real Estate report.  With higher starting salaries than elsewhere in the nation, young people are moving to DC to take professional, high-paying jobs especially linked to the federal government’s high paying positions and job security, and establishing roots in their adopted city.