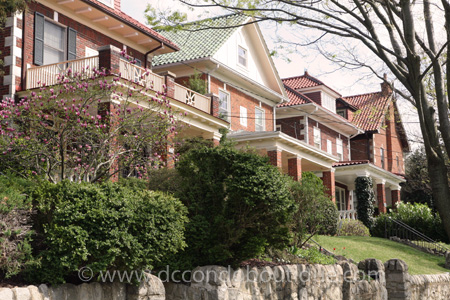 The hot residential Crestwood neighborhood is quietly tucked away between 16th Street and Rock Creek Park that some say may have one of the hottest markets in DC yet also offers residents a taste of suburbia in the city.  The Crestwood neighborhood in northwest DC has seen a spike in median sales prices this year, up 17% over last year, from $800,000 to $940,000 in 2015.  Homes are definitely selling faster this year with only 23 average days on the market compared to 77 days last year, showing a whopping 70% drop in days on the market.  A high of 64% of the homes listed were sold in 2015 within the first 10 days on the market.  The homes are regularly selling for above list price.

Crestwood is approximately a 15-minute commute from the K Street business district downtown.  The nearest Metro Stations are within walking distance, Columbia Heights and Georgia Avenue-Petworth on the Green Line and Van Ness-UDC on the Red Line.  Multiple buses run regularly on 16th Street to government offices, downtown, and the National Mall to the south.  It’s a short drive to Adams Morgan and Dupont Circle.  The neighborhood has ample parking and is near major roads, including 16th Street, Connecticut Avenue and Beach Drive.  There is almost no thru-traffic to the north of Columbia Heights and Mount Pleasant.

Crestwood is a part of the residential enclave known as the “Gold Coast” on upper 16th Street, NW.  It’s an entirely residential neighborhood bordered on three sides by popular Rock Creek Park.  Crestwood is well known for its affluent, successful and educated African American elite residents, although the community has become more diverse with turnover of older residents. Located directly north of the White House on 16th Street, Crestwood features single-family homes and sprawling green lawns, beautiful and quiet streets dotted with flowering bushes and mature tree canopy. Most of the homes sit on large plots of land with yards and driveways.  Many homes in Crestwood are towering brick Colonials with 4 or 5 bedrooms, although there are also Tudor-style mansions, some brick ranch homes and a few blocks lined with row houses.

The neighborhood has a cohesive feel with residents who communicate via an active listserv to organize block parties; holiday events for Fourth of July, Halloween and Easter; and potluck dinners that attract families with young children.  Crestwood residents are fortunate to be near the Carter Barron Amphitheatre and William H.G. Fitzgerald Tennis Center.  The amphitheatre plays host to concerts and free cultural events during the spring and summer, like the Shakespeare Festival.  The renowned Legg Mason Tennis Classic is played at the Tennis Center next door.

Here is a resource to explore Crestwood real estate currently listed for sale.