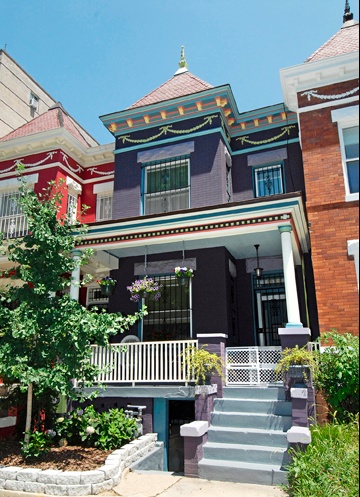 Carmel Marchiatto to Starbucks…..Jim Graham to Ward 1.….The Captain to Tennille…..row houses to Columbia Heights …yes these are things that just naturally go together.

Significant portions of the Columbia Heights neighborhood was built in the late 19th and early 20th centuries and was dominated by row house architecture. The neighborhood offered middle-class Washingtonians single-family home ownership options along its row house lined streets. By 1914, Columbia Heights had four street car lines providing access to Downtown in less than 20 minutes.

Largest and most ornate design which often includes a turret and decorative front stoop rather than a porch. Three floors is common as are decorative lintels and ornate front doors.

Influenced by mission styling and the automobile age, the Petworth style row house is the most common in the Columbia Heights neighborhood. These homes are often two stories with dormers built into an attic. Front porches are common as is a basement garage accessible from a rear alley.