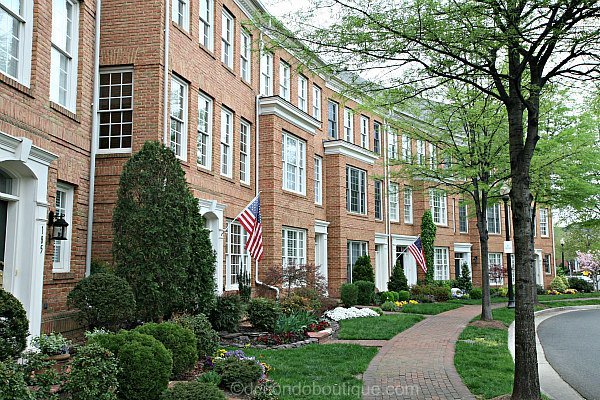 From former Army post to planned community, Cameron Station enjoys a rich history in Alexandria. Built up on former military land, the Cameron Station of today is a more than 100-acre community of hundreds of condos, townhomes and single-family homes.

This thriving community sits in Alexandria’s West End, taking the place of a military base that closed in the mid 1990s. The first homes of Cameron Station went up in the late 1990s, with construction taking place over several different phases.

These days you’ll find a number of desirable residences to choose from, many of which were built with 18th and 19th century architectural elements in mind. The entire community was designed to create the vision of an American small town.

That’s why you’ll find things like pocket parks, colonial streetlamps and brick sidewalks in this charming community. Another key advantage of living in Cameron Station is all of the green space.

The community enjoys a number of parks, with plenty of space for outdoor recreation. City parks sit at each end of Cameron Station, including some picnic areas and playgrounds. From tennis courts to a duck pond, dog parks and space for jogging, biking and walking, Cameron Station has it all.

In addition, Cameron Station is also home to a number of shops, restaurants and other businesses, all of which sit within walking distance of area homes. The Cameron Club is where locals go for social gatherings, plus you’ll also find a fitness center, meeting rooms, swimming pools and more.

A grade school even sits on the edge of the community, plus a library sits close to the homes of Cameron Station, as well. For commuters, a free shuttle bus runs from Cameron Station to the closest Metro Station, while a second Metro station sits just a few miles away from the community.