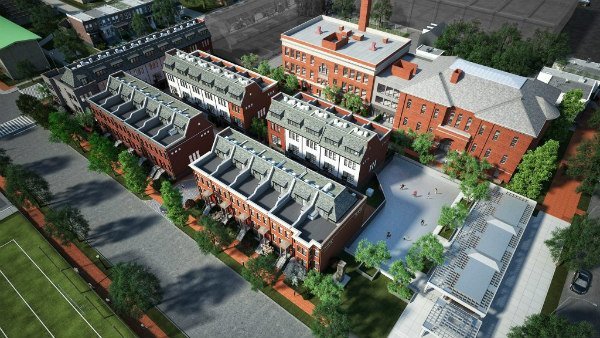 Sales are off to a brisk start at Buchanan School; where in just the first week developers have already secured about half of all available units under contract. The project promises 41 new luxury condo units as part of a conversion project that involved restoring a more than century-old school building.

First built in the late 1800s, the historic Buchanan School served just one purpose for about 100 years, before finally closing its doors in the mid 1990s. Now, years later, crews have been hard at work restoring the old building and transforming it into its new, more modern role.

It’s expected the new and improved Buchanan School will open up soon, this time with a blend of carefully restored and redesigned architectural features, spruced up with some more sophisticated and modern touches. Each of the homes is set to offer high ceilings, large windows and some exposed brick walls. As well, many of the homes additionally provide private outdoor space, with patios and balconies adding on another 100-300 square feet of space.

With the choice of a one-, two- or three-bedroom design, however, each unit is truly unique. While some of the old features of the building have been left intact, the condos also include new white oak hardwood flooring and white oak cabinetry, along with some marble in the baths, quartz countertops and stainless steel appliances.

The building itself includes parking for an extra fee, a bicycle room and an elevator. In addition, there’s a library and fireplace in the lobby and a landscaped patio with room for grilling.

Buchanan School is part of the larger Buchanan Park development, which offers townhomes and a carefully landscaped central green, as well as some more intimate gathering areas, with linking walkways to the surrounding Capitol Hill neighborhood. It is also just a few blocks from Lincoln Park, Barracks Row and Eastern Market.