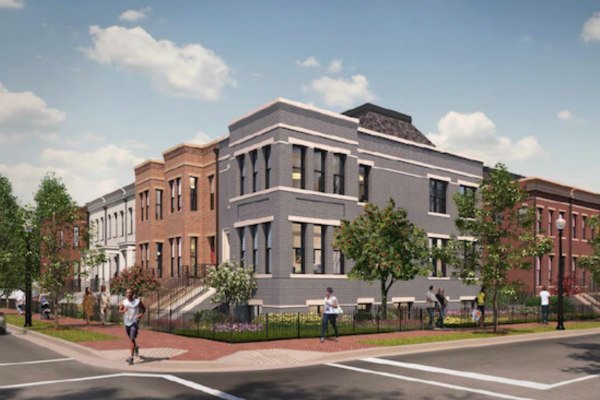 With phase one quickly approaching completion, the much-anticipated Buchanan Park project is creating a real buzz in Hill East. The new development is a major step forward in a project that began about a year and a half ago when developers first purchased an old schoolhouse and townhomes at the site.

The larger project involves converting the old school into condos, then surrounding them on two sides with new, multi-level townhomes. While the first townhomes should be delivered in early summer the first condos will likely go up for sale sometime later this summer.

When finished, Buchanan Park will offer dozens of four-level townhouses, some with elevators, rooftop decks and garages. Priced upwards of $1 million, the homes will include three-bedrooms and 4.5-baths. The all-brick exteriors are being designed to help the homes blend in with other historic structures in the neighborhood.

The old school building, meanwhile, will retain some of its original architectural details and features such as the wide stairways. In addition, homeowners are sure to enjoy the high ceilings, oversized, arched windows and the exposed brick, original to the building. As well, the homes will offer wide plank wood flooring and marble baths, blending old and new design principles.

Expect to find condo units ranging from the mid $300,000s to around $1 million, some including private patios or balconies. The condos will provide your choice of one-, two- or three-bedrooms.

The entire development will also be complimented by common green-space, including trees and some restored concrete sculptures. Buchanan Park conveniently backs up to a local grocery store plus is close to an elementary school, rec center and nearby residential project that’s also helping to transform and reawaken the historic surrounding community. In addition, Buchanan Park is not far from Eastern Market, a prime destination for purchasing fresh food and produce, arts and crafts, plus the host site of various community events.