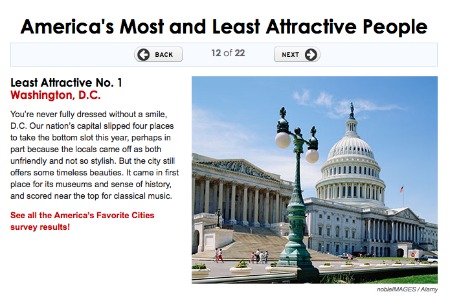 There’s good news and bad news.  First, the bad news: Travel and Leisure Magazine calls DC the least attractive city in the country because they say the locals are seen as unfriendly and not stylish.  San Francisco was ranked the most attractive city.  DC moved down 4 places to take the very bottom slot this year.  But the good news: Travel and Leisure put DC in 1st place for its museums, art galleries, history and classical music.

The magazine conducted an online survey between June 1 and September 1 of this year, asking people to rate 35 big cities.  The survey allowed for repeat voting, so this wasn’t a scientific poll.  Earlier this year, a separate Travel and Leisure survey found DC as one of America’s “snobbiest cities,” as a reflection of the locals being unfriendly.  The magazine also called DC “the most gay-friendly city.”

Wow! The good news is that I live in Portland and it looks like we are number 5 on the list of most attractive cities. I would disagree with DC being the least attractive... One of my best friends lives there and she is gorgeous!

What a fun article. Thanks!