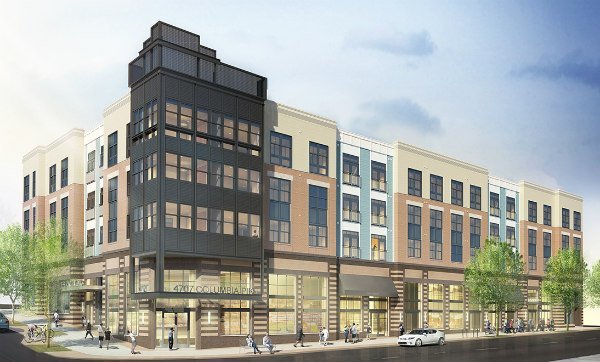 A new residential development is taking form in Arlington, where construction permits were recently issued for 4707 Columbia Pike. The project began with tearing down the old El Tutumaso restaurant building, where soon a four-story condominium building will stand in its place.

With nearly 80 separate units and grounded by 8,000 square feet of retail space, the development will also offer a mix of underground and surface parking. The 78 luxury residential units will range from efficiency homes to two-bedroom homes; each accented by large windows and including spectacular views from the private balconies. In addition, the structure will offer a massive public terrace for all to enjoy, plus reserved bicycle storage spaces.

Located at Columbia Pike and South Buchanan Street, Pillars Development Group gained approval for the project in late 2014. The developer is the force behind dozen of other projects and thousands of residences in Alexandria, Fairfax, Reston Town Center, Tysons Corner and Arlington, including The Berkeley condominium high-rise.

The new development at 4707 Columbia Pike is only a few minutes away from Downtown Washington, plus close to Washington National Airport. As well, the location allows for easy access to the numerous museums and national memorials located in Arlington, and the area serves as the headquarters to numerous federal agencies and government departments.

While a number of residential neighborhoods and apartment complexes in Arlington exist on the National Register of Historic Places, there are also new developments, such as the one at 4707 Columbia Pike in the works, making the area an attractive destination for future home and condo buyers, as well as an enviable location for those who already make their home in the region.

No official delivery date has been widely released as of yet, though original plans called for new residents to be able to move into the property 18 to 24 months after the start of demolition and initial construction at the site.